I’d like to share this next post just to show what can be done with multiple photo references.  It’s a painting of 3 hounds and it’s loving modern day owner, staged in front of a Scottish historical cottage called the Leanach Cottage from the 18th century.  The references were not complete, so I put together a combination of 14 in total to make the references for the painting.  The first step was to put the group in front of the cottage. 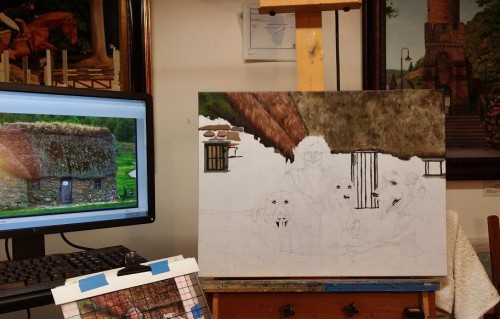 Since the group photo wasn’t complete enough to fill the foreground, Sean, the first Irish Wolfhound on the left had to use multiple photos to have his full body included in the painting.  I should also mention that the owner’s hand in the original reference had the fingers curled under and looked like the fingers were cut off.  So I searched the references she sent me, and substituted a different photo of Sean which I liked better in the eyes, than the original reference anyway.  It was a win win substitution. 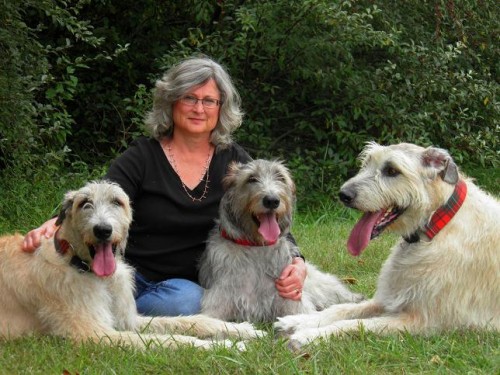 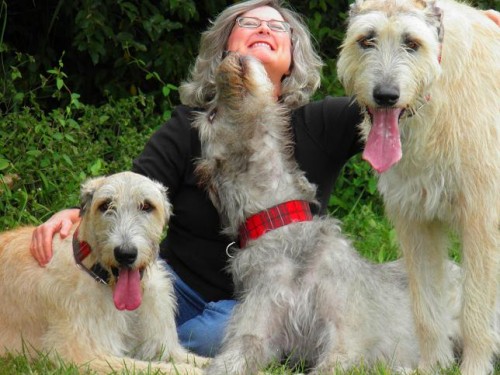 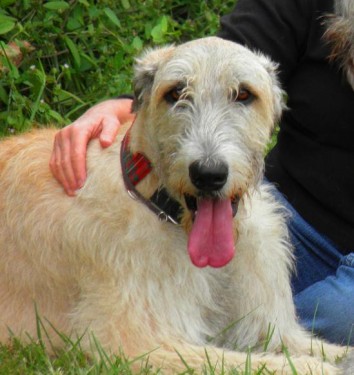 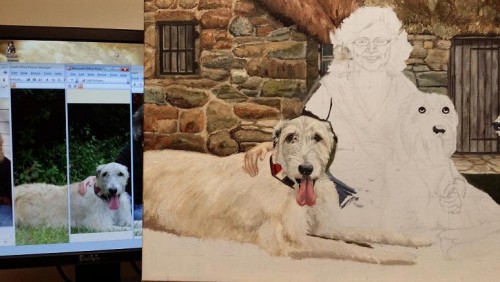 Sean’s block in and face details

I paint left to right and started with Sean. The eyes on the Irish Wolfhound are so magical. This is usually the part that takes me the longest.  Checking shapes continually on the eyes and nose, stepping back over and over and squinting to make sure those shapes are accurate.  You can see how I put two photos together on my monitor to paint Sean.  The second photo was from the same scene. 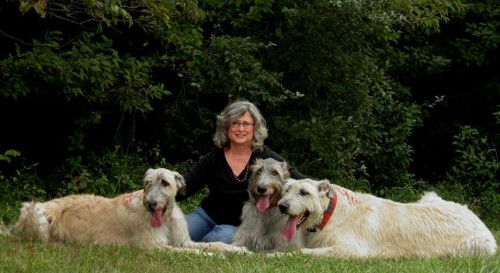 Jennifer although lovely in the original photo, had a beautiful smile on her face in yet another photo.  So I opted to change her head in photoshop.  I was able to do that since the second reference had a similar pose. 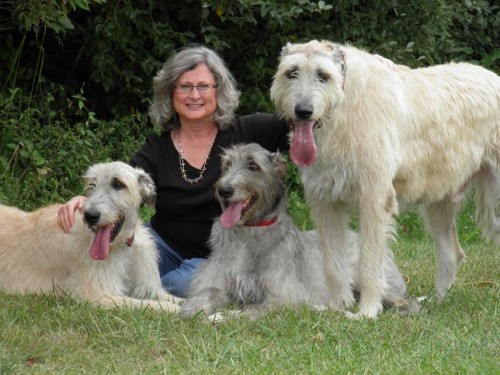 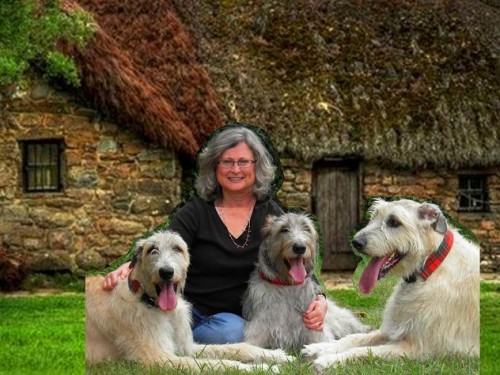 The original reference with help from photoshop

Jennifer being the patient person she is, waited over a year for her painting.  In that time she lost a lot of weight (congrats!) so I had to determine what she would look like many lbs thinner.  I asked for current references.  I thinned her face and made a few other changes to represent the thinner Jennifer. 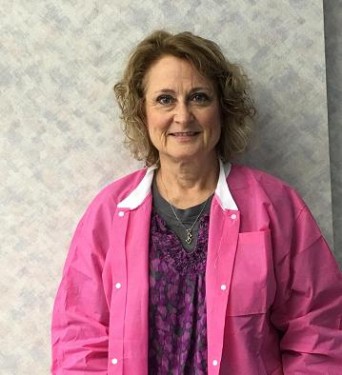 She also wanted her tartan included in the painting. 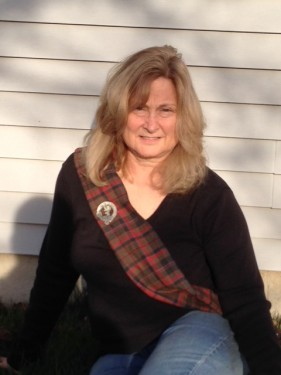 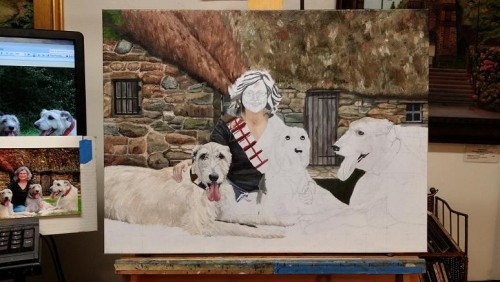 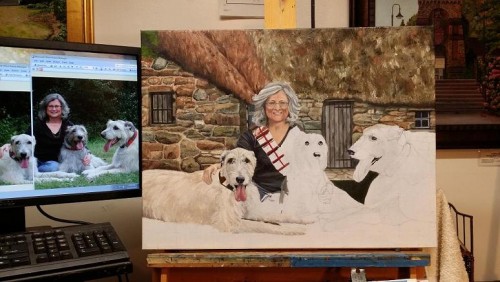 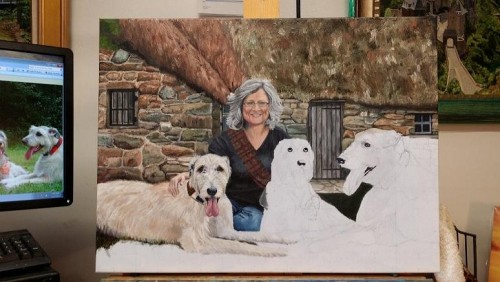 I had to make sure the head, neck and hand were all consistent.  They will go through multiple changes as will the tartan, but for now, I was moving on to Farley.

Farley had his own challenges. Where were his legs?  Ah hiding under the other boys! 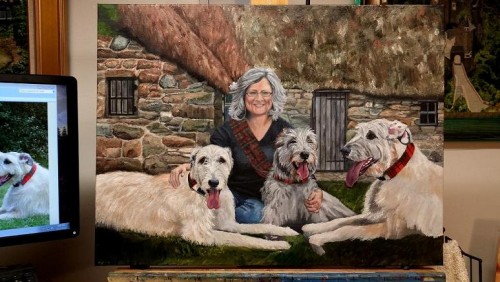 I was able to use the original photo reference for Farley!! Checking shapes and color consistency with Jen’s hand.  Ah let me mention those Cumming’s tartan collars and colors. Anyone who paints knows how red likes to bleed all over your other colors.  So I put the collars in on all the boys, so they could get a skin over night (actually over a few days), so they wouldn’t interfere with the wheaten and light gray hairs. 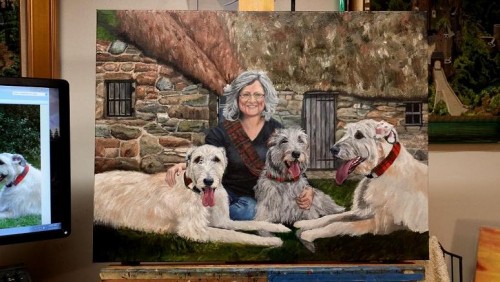 Seamus was also used from the original reference along with a few extra hairs from my imagination in order to make it to the end of the canvas! 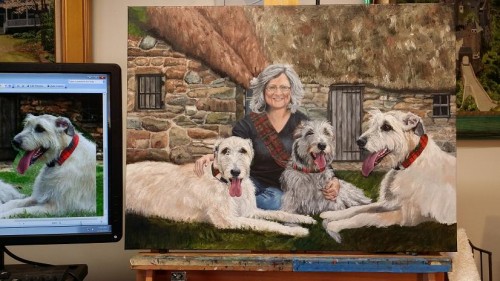 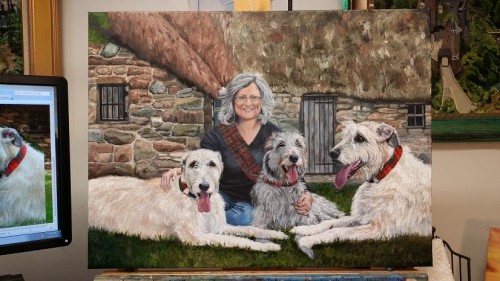 And the 98% final painting from many photos. 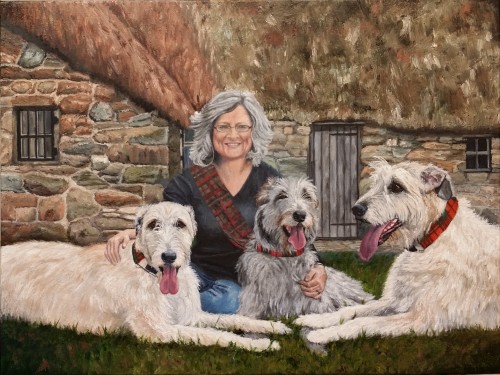 The Cummings Clan at the Leanach 98%

This entry was posted in Art in Progress. Bookmark the permalink.